6 reasons why everyone is outsourcing to Southern Europe - Sonnecto

Southern Europe is a thriving area encompassing parts of the EU and expanding hubs of trade: a well-connected channel for the outsourcing landscape. This is not a secret: Deloitte’s 2016 Global Outsourcing Survey showed that 65% of companies who outsource, do so in Europe. Indeed, according to a DAXX survey of companies in the DACH region of Germany, Austria, and Switzerland, 77% of German companies outsource IT projects to Europe, especially the south. It is Southern Europe in particular that is thriving, as the Global Services Location index shows that two out of the top three most attractive European countries for business process outsourcing are from the region.

Bottom line: Everyone is reaching for the gold.  But how has South Europe amassed this success in offshore outsourcing? And where is the trend headed?

The south of Europe is likely to retain its success and hub of activity in BPO due to its incredibly strategic location, virtually at the epicentre of the world’s leading powerhouses. With most countries either within or bordering the EU, free movement, trade agreements, and convenient time zones, the southern european region won’t lose its magic anytime soon. Proximity to powerful world economies is a true advantage over economies in the east, as those who choose to outsource nearby show a striking 81.5% satisfaction rate compared to far outsourcing (33.3%).

Many countries in South Europe are members of the European Union, and as such are subject to the strict laws and regulations of the EU regarding privacy. Countries in the region, such as Kosovo, have built their laws and regulations according to the neighboring EU and comply fully to the standards, with most legislation bordering on identical. More than simply complying, this region has led the world in prioritizing intellectual property protection, as Portugal, Spain, and Italy are founding members of the Union for the Protection of Industrial Property. These airtight security measures are critical for core outsourcing in the IT sector, in which data exchange is frequent, for positions such as software engineers or CTOs.

We speak your language (literally)

Although the languages spoken in the area are global, English fluency is the rule rather than the exception. In Kosovo, as assessed through standardized testing, pupils about to enter high school score higher on English grammar than their own native tongue. This is not a surprise, considering the well-pronounced and accent-free English of Kosovars, to which its success in US customer support is attributed.

What’s more, many Southern European countries have experience with tourists and foreigner presence, and intercultural communication skills are the norm.

Make no mistake. Beyond the natural landscapes, the South of Europe is a technological utopia. Kosovo stands well above the EU average with a striking 93% internet access rate, whereas Portugal is the European leader in FTTP: fibre-to-the-premises access, covering almost 90% of its territory. The rest of the region is similarly interconnected and forward-thinking in technology.

South Europe is full of untapped potential with a talented and highly educated workforce. For example 53% of Kosovo’s population is under the age of 25, and the overwhelming majority are overqualified or in a mismatch between their occupation and field of study, leaving a significant number of highly educated young people in Kosovo eager for work. Portugal ranks 17th in the IMD World Talent Ranking and has the second highest public expenditure on education. Italy ranks highest among OECD countries for young people expected to obtain master’s degrees. Albania and Macedonia stand 1st and 3rd in percentage of female researchers in all of Europe, according to a 2015 UNESCO ranking.

They are already in the future

Business Process Outsourcing is definitely not just a trend for South Europe. The Italian BPO services market had a total revenue of $5.1 billion in 2018, and shows a positive correlation with technology, as outsourcing grows more successful in tandem with technology, in the promising field of IT. In Kosovo, a similar trend sees companies such as Sonnecto trailblazing digital transformations and BPO in fields as varied as hospitality, pharmaceuticals, and technology. Many experts predict further growth of BPO in the healthcare sector, which Greece is already ahead on, in both public hospitals and private healthcare organisations. Portugal was ranked among the top developed countries which show greater potential to outsource services in the IT sector, as the fifteen largest IT Outsourcing companies, as ranked by IDC 2009, represent a very large portion of Portugal’s GDP. The region provides ever increasing quality services, while pricing remains competitive despite the growth. Who wouldn’t outsource IT work after seeing these numbers?

In conclusion, the South of Europe has an arsenal of human and technological capacities to maintain its lead as the ideal outsourcing destination. The activities of the region are in the most impactful sectors, such as IT and healthcare, and are in line with predicted growth of the sectors and trends. This makes BPO in the south of Europe an exemplary and sustainable business strategy for present and future decisions.

5 reasons why your company should consider outsourcing

5 reasons why your company should consider outsourcing

6 reasons you should outsource to Kosovo 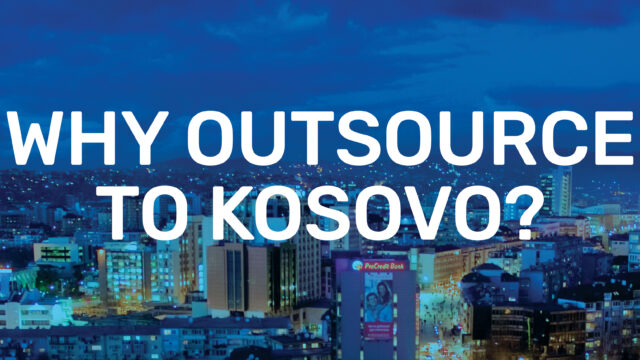 6 reasons you should outsource to Kosovo

About us
Why us
Greater Growth
Careers
Blogs